How Expensive Is Singapore? Breaking Down The Travel Costs

Singapore has a reputation for being pricey with a capital P! However as with every expensive city I’ve been to, there are always hacks and shortcuts you can make to make sure you have fun without blowing your budget. My boyfriend and I were unsure how long to spend in Singapore as we were five months into a backpacking trip and were travelling on the cheap. We weren’t pinching the pennies to the point that we’d stay in a forty-person dormotories (*shudder*) but we were mindful of our spending and didn’t want Singapore to completely sabotage us. We decided to spend two nights there, which turned out to be the perfect amount of time for us. In this post, I’m going to share how much it costs to stay, eat, drink and sightsee during a fleeting forty-eight hour visit.

Disclaimer: Exchange rates are constantly fluctuating, so I have written prices in Singapore dollars (S$) and euros as they were at the time.

Your biggest expensive is going to be accommodation; there’s no two ways around it. We searched through several booking sites and also asked a Singaporean friend of mine where we should stay. She suggested Chinatown or Little India, two of the more affordable neighbourhoods to stay in. We chose Capsule Pod Boutique Hostel in Chinatown and paid €58.72 euros (S$92.19) for two capsules for two nights. The location was fantastic; directly opposite the Chinatown subway station and a short walk from lots of eateries and amneties. Capsule pods are not for the claustophobic but these were well-equipped with comfortable bedding, lamps and power sockets. There was also ample space to safely store our backpacks.

The food in Singapore is tasty and inexpensive, as long as you visit food courts and markets rather than swanky restaurants. It is greatly influenced by Malaysia, China and Indian so there’s a fantastic amount of variety and spice. One Singaporean speciality is laksa, a noodle dish with seafood and a coconut milk & curry broth . We also ate some tasty nasi lemak  – one of our favourite Malaysian dishes – which only cost S$5 per person (€3.19). Nasi lemak consists of toasted peanuts, crispy anchovies, sambal sauce, sliced cucumber and coconut milk rice. It’s often served with deep-fried chicken – so good!

We mostly ate at food courts – such as Ayon Market and La Pau – and prices ranged from S$10 to 25.50 for two (€6.37 – 16.24). The food courts were very clean, with on-site cleaning staff regularly clearing and wiping down tables. There are also sinks for you to wash your hands and you can actually find soap in the soap dispensers (somewhat of a rarity during much of our travels around South East Asia!). Besides lunches and dinners, we enjoyed some snacks, which ranged from 3.20 to 4.40 SGD, from things like icecream, egg custard tarts and moreish pepper buns (chicken & black pepper in pastry, like a little cornish pastie).

We actually splashed out on alcoholic drinks in Singapore, because I was so grateful to see wine on the menu after several weeks in Malaysia (a predominantly Muslim country, which limits the sale of alcohol). Alcohol can be a major expense in Singapore so we avoid all the swanky rooftop bars and stuck to places with Happy Hours or other special promotions. We spent €34.45/S$54.09 at The Southbridge Hotel Restaurant and Whiskey Bar. In another bar, we paid €15.75/S$24.73 for several drinks. In terms of non-alcoholic drinks, we got a lot of fruit juices, including ultra refreshing sour plum juice. These cost between S$1.50 – 2.50 (€0.96 – €1.59).

Singapore has a lot of sightseeing options, such as Universal Studios, Madame Tussands, river cruises, a zoo and aquarium. However, as we were there for such a short time, we didn’t want to fill up our schedules. One thing we knew we had to see was Gardens by the Bay, a 101-hectare area which contains conservatories, gardens, a river and the Supertree Grove. The waterfront gardens are free to enter, but you have to pay to go inside the conservatories and up the 22-metre high OCBC Skyway viewing deck. You’ve probably seen photos of these supertrees online but it’s something else seeing them in person. They are vertical gardens; colourful flowers and plants sprouting from gigantic, environmentally sustainable man-made trees. We were so lucky to be on the OCBC Skyway during ‘Garden Rhapsody‘. At 7.45pm and 8.45pm, the supertrees light up and change colour in time to classical music and opera. Such a special moment. 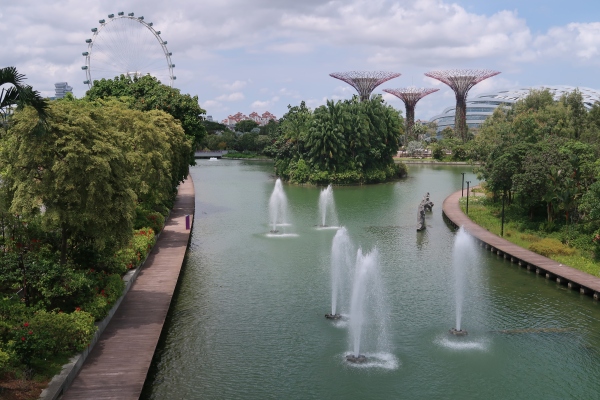 We bought tickets via the website Klook, which offers a lot of special deals for Singapore’s sights and attractions. We paid €40 for two tickets for entry to the conservatories (Flower Dome and Cloud Forest) and OCBC Skyway. We saved almost €7/S$11 booking via Klook, rather than buying tickets at the main ticket office.  I particularly enjoyed the Cloud Forest, which contains the world’s tallest indoor waterfall (a whopping 35 metres high!). You enter the conservatory and the first thing you hear is a tremendous roar of water then water spray hits you in the face as you gaze up at this gorgeous display. Visit after sunset to see the waterfall lit up with different colours.

The Gardens by the Bay are next to the Marina Bay resort, which includes an ultra swanky hotel with an infinity pool and viewing deck. Only hotel guests can use the infinity pool but the viewing desk is open to the public. You can also find the innovative, futuristic double helix bridge nearby. It’s 280 metres long and is based on the double helix strand of DNA.

There is a very efficient public transport system, including a complex bus network and the Mass Rapid Transit (MRT) subway system. It was great to be able to pay for our fares using contactless payment (via Mastercard and Visa contactless bank cards). Contactless payment is so quick and convenient, and you don’t have to worry about losing your ticket or coupon. If you’re staying in Singapore for a few days, a Singapore Tourist pass or EZ-Link card might make more sense.

Despite the excellent public transport system, we walked as much as possible. Singapore was much prettier than I expected: I thought it would be very industrial with skyscrapers and imposing office buildings. To be fair, those do exist but there are also lots of charming, colourful old buildings. We enjoyed wandering the streets (snack in hand), admiring the pretty, painted wooden shutters which adorned so many buildings. Little India was especially colourful so make sure to visit for some photo opportunities – and delicious curry! 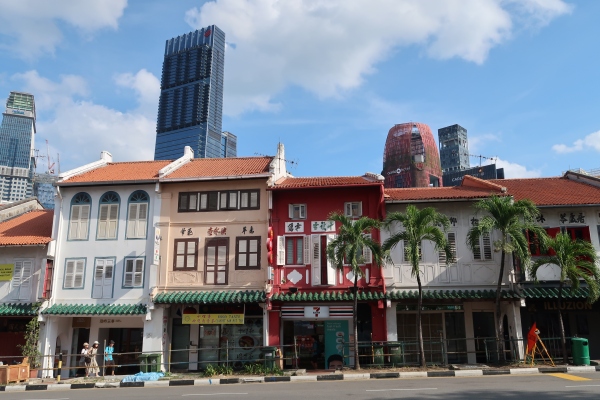 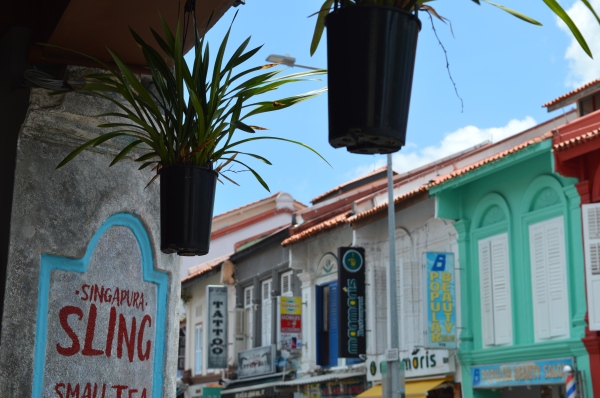 Is that what you expected or did you think Singapore would be more or less expensive? If you’ve been to Singapore, what did you think of the costs? If you have any saving tips, please leave them in the comments below!